CBDC is a type of virtual currency that is backed and issued by a central bank. As Cryptocurrencies and Stablecoins have grown in popularity, central banks around the world have realized that they must provide an alternative—or risk missing out on the future of money.

CBDCs are being researched or developed in more than 85 nations throughout the world, and they’re at varying stages of development. Others have already launched their digital currencies, while others have inactive or terminated initiatives.

In my prior post, I introduced Stablecoins and the problem they solve for the world of crypto by creating a digitally native version of a national currency that you can hold or trade as if it were cash, 24 hours a day, 7 days a week, 365 days a year.

We will learn the following in this article:

What is a CBDC?

CBDCs are the central bank’s response to Stablecoins, which have arisen as a more convenient and desirable form of money for the 21st century.

Just like YouTube competes with Facebook or Instagram in response to technological innovation, central banks for the first time, since the Wildcat banking era of the 1800s were faced with competition over their monopoly on the issuance of money.

They now have a new challenger in the marketplace. If you think about it in every part of your life, even your parent’s and grandparents’ life, it has experienced major forms of technological innovation over the last 50 to 100 years.

We’ve had jet engines, automobiles, cell phones, the internet, all sorts of science and technology. But money as technology has basically been unchanged since the founding of the Bank of England in 1694.

To recap on Stablecoins, a stable coin refers to a stable value coin that is paid to either a single fiat currency, a basket of currencies, or even other tokens.

Why do central banks believe they need digital currencies?

First monetary competition has forced the central bank’s hands. This is simple. Central banks, whether they admit it or not, must implement CBDCs, because stable coins have shown the world that they are an alternative to the current system of fiat currencies that are faster, cheaper, open, more nimble, and 24/7, 365 for the entire world.

There’s no need to take a lunch break. And there was no need to close at 5:00 PM. Regardless of the final outcome of Stablecoins and how various nation-states treat them, that genie of knowledge and experience is now out of the bottle.

Stablecoins are proof that many of the retail banking functions and even commercial banking functions are no longer necessary today. This is why many central banks, including the Bank of International Settlements, have been rushing to set up innovation hubs and run CBDC pilots and creating working groups on the one hand, while on the other hand, stopping Facebook now known as Meta from launching their product.

In short, the single most important word is control. Specifically keeping control of the financial system in the same core hands and not letting it become disintermediated in any way. This is the subtext for the nation-state interest in the topic, in my humble opinion.

Which is basically cutting interest rates, stimulating the economy, and getting the business cycle going. This policy tool is literally out of gas. We’ll probably see a rise in interest rates over the coming quarters, but it’s basically mathematically impossible to raise rates anywhere near the double-digit levels of the 1980s because the Western world has too much debt.

It would crash the housing market. It would crash the stock markets and it would wreak havoc on the global economy. Additionally, the last two years is basically blown out the balance sheets of major central banks. And they’ve taken on extreme levels of debt.

This topic has been discussed by some great thinkers whom I will link in the show notes in case you want to read on those topics. If you’re interested, let me know in the comments and I can make an article on that subject.

But this macro backdrop of chaos is where CBDC has come in. They were a new policy tool and because they are digital and can be programmed to specific policy aims for fiscal and monetary policy, they’re really only limited by what is politically doable.

To be fair programmable policy via CBDCs could remedy some of the bigger societal issues such as inflation, but this has to be balanced with the scenario of Golem and his precious ring from “Lord of the Rings“.

Very few nations or even people would be able to responsibly wield this type of power over the term. At least history has shown that.

How CBDCs are different from Stablecoins?

CBDCs are very different from stable coins because they’re unlimited. Meaning they can be printed and issued. Their programmable means that they can be used and changed and set up all sorts of parameters to basically incentivize you to do what the nations want you to do.

Whereas a Stablecoin is regulated to serve as a one-to-one peg against a fiat currency, a basket of currencies, or other assets like bonds or gold.

But I do not believe at the end of the day, the government will allow that project to get off the ground for the simple reason, is that it represents a true threat to nation-state power, given the size of Meta and their global user base.

Let’s see how that plays out. CBDCs have no rules on what they can be programmed to do other than political limits on the particular government behind the CBDC, which will vary based on the nation’s political system.

And this is what freaks some people out about CBDCs. They could be used by governments as a policy tool to cancel people economically from society. Or they could be used as tools that benefit society or help specific communities in ways that serve and uplift everyone.

Let’s take a look at an example of how CBDCs may work in the future. Since central banks control CBDCs, I want to point out that the biggest criticism of the current financial system remains and could get worse.

And that is that central bankers will be able to play around with the money supply. This won’t change under a CBDC era.

Now, on the other hand, you could argue that there’ll be checks and balances, but at the end of the day, as I’ve said, history has shown that when power is created like this, it will eventually find a reason to be used.

And this is why many would say that CBDC has actually increased the need for Bitcoin. I actually tend to agree with this view and I’ll make an article on how I think Bitcoin’s role becomes more important in a world of CBDCs.

So to understand the role of a CBDC, you need to have a basic idea of the current banking system. In short, there are two core components of a modern banking system that all major economies use. And this is the Wholesale Banking System and the Retail Banking System. 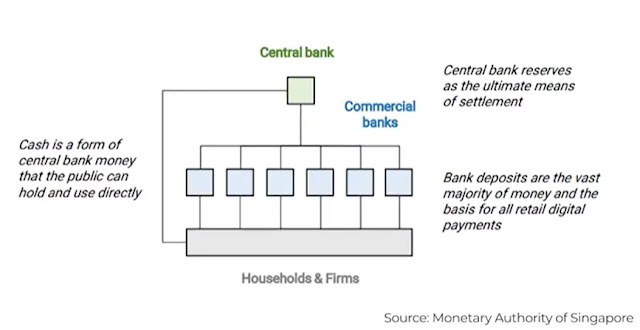 The image here is from the Monetary Authority of Singapore or the MAS for short, and it shows a simplified relationship between the central bank and commercial or retail banks for the majority of nations.

Of course, there are some variations, but this gives you the general idea of let’s say G7 nations. This shows the basic relationship between the cash that you have in your bank account and the central bank.

Whether you live in the US, Canada, the UK, Singapore, etc. Each of those nations follows a structure similar to the image you can see. The image explains that the cash in your pocket is just a form of central bank money.

So if you look at the dollar or Euro or pound that you have in your pocket right now, you will see a reference to the Treasury Department in the US or the Bank of England or the European central bank or the monetary authority of Singapore.

So do me a favor wherever you are, and wherever you’re reading this, pull out a banknote and let me know in the comments, what central bank backs the cash that’s in your hand right now.

So what is an example of possible retail or consumer-focused CBDC structure that we might see in the future? Recall that our retail CBDC would be a tokenized currency that you would use every day versus a wholesale version of a CBDC is basically a funding mechanism between banks and other institutions.

So when you hear a reference, if you do in the future, to a wholesale CBDC, that is a government talking about providing money to banks directly, or between other governments, or between very large institutions.

Think Amazon or Facebook, things like that. In a retail CBDC world, the Monetary Authority of Singapore has laid out a likely scenario and pointed out some key dangers, which is why all nations are rushing to work on their own CBDCs, which we’ll get into.

First, let’s take a look at a possible structure, laid out by the Monetary Authority of Singapore. The first thing you will notice in the image below is that it is possible future cuts the connection between the Central Bank and the cash in your pocket.

This is important because what the MAS is acknowledging is that technically the Circle USDC and Terra Luna of the world, are privately issued stable coins, but they could actually replace the function of central banks altogether.

In this world, your current retail bank is basically out of the job because the technology stack and the Central Bank issuance of money cut them out directly.

Note, CBDCs are a radical change from the perspective of a central bank, because it changes the way things have largely been for well over 300 years. And this scares the heck out of governments and central banks, hence their rush to put plans in place and wrap their heads around this topic.

The other risk that MAS highlights are that in a CBDC world, there is no friction to stop people from choosing to use another country’s CBDC since everything is digital and the technology does not naturally have wall gardens or borders like we do today when you want to send a bank wire, or you need to go to another nation.

This means that any country could find itself in a situation where the people prefer something else and adopted very quickly on mass. And this could lead to a stampede out of the national currency into a new form of digital money.

In this world, the state could end up potentially being irrelevant at worst or at best have a smaller role in the financial lives of people. And this would hit tax revenue.

This post is not to editorialize the merits of either side of the argument, but merely to point out the risks the central banks and policymakers are thinking about.

So let’s recap. A CBDC is a central bank programmable money that creates the ability for central banks to direct monetary policy in a laser-focus way that the world has never seen before. In contrast, a Stablecoin is just a one-to-one peg token to a national currency or another asset.

We’re living in a new era now because central banks are being forced to innovate and develop new technology, just like tech companies we all know about, but in this case, the new innovation is coming to your money and this will affect your wallet or your purse.

Let me know in the comments what you think about CBDCs and Stablecoins and be on the lookout for an article I’ll put out on Bitcoin and how it might fit into this new world we’re living in.

That’ll do it for today. See you next time.