Ethereum is a software platform based on Blockchain technology. By volume, Ethereum is the second-largest cryptocurrency.

On the heels of Bitcoin, programmer Vitalik Buterin created Ethereum in 2015. Ethereum is a software platform that developers may use to construct new applications.

Ethereum 2 refers to a series of updates that will improve Ethereum’s scalability, security, and long-term viability. Multiple teams from around the Ethereum ecosystem are working on these upgrades.

Ethereum 2 has been 6 months away for soon 5 years and now when I think it will actually happen it’s completely misunderstood.

I don’t think the big move in ETH price will wait for ETH2 next year. It can happen now. This week we had a hugely important break-out in the chart. But I think $50,000 could be conservative.

The one thing that the ETH2 Merge really will do is to cut the electricity consumption by 99.95%+ but it’s not the Merge that will improve scalability, the tips, or the cost.

The fee structure is contrary to what everyone thinks. Right now Ethereum is broken. The fees are crazy. Cost matters.

One of the things I absolutely love about crypto is that it is truly inclusive. It doesn’t matter which country you were born in, your skin, your age, your social background, or your accreditation status.

Everyone has the chance to the exact same percentage gains. Then even if you start small, you can grow that into a sizable investment portfolio.

It’s funny to see how the old banking system and the politicians absolutely hate this, that the plebs get access to the same investments as the rich people do.

Then they disguise banning it with “protecting investors”, while I still haven’t met anyone who wants to be protected from free airdrops like the dydx  coin that became worth a million dollars, or double-digit stable-coins yields from Celsius.

But the high gas fees on Ethereum, into hundreds of dollars per transaction, breaks this inclusiveness, in my eyes. I hate it. It’s why I was so early on the first real Ethereum challenger that got momentum, which was BSC.

And now everyone is waiting and hoping that ETH2 will fix this – The Merge. The Merge is where the current Ethereum main net will merge with the beacon chain to form the new Proof of Stake Ethereum and it’s planned to happen in Q2, 2022.

And this time, the plan and progress are a lot more solid than it has been before. I think it will actually happen this time. But the merge won’t do anything about the fees or the scalability.

Are you sad to hear that? Well, you shouldn’t be because the solution to both of those, both fees and the tips, is here now, already 2021.

That’s why I think it’s a mistake from an investment perspective to wait to enter until next year, thinking that it will be the ETH2 merge that really fuels the price, with wide adoption coming back from the cheaper and faster Ethereum killers, back to Ethereum.

But what about Staking? Yes, but that’s also already in effect. You can do that already now. You can already today, stake on Beacon chain for yield. Look here you get like 5.2% doing that. Not bad.

And yes, there will be an additional supply contraction effect after the merge. That will have a huge long-term effect.

But short term I think it’s negligible compared to the inflow and outflow of money into Defi, NFTs, etc. ETH price has moved 1,000% in 1 Year, 2,700% in 2 Years, fueled by the adoption of Defi, stable coins, NFTs. 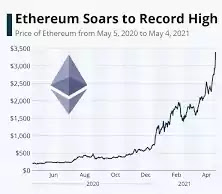 That’s caused by an enormous uptick in demand. People buying Ethereum to participate. Here we’re talking about moving from a supply growth from 2% per year to -2%.

Long term over the years and decades that will be very important, but short term the effect is small. But why won’t the Merge effect the Tps then? Because it’s not the miners that limit the block size. What’s limiting Tps is

And target block size is 15 million gas. In the London hard fork earlier this year that[max blocksize] was increased to 30 million gas for a whole block.

That was a doubling of the capacity but it almost disappeared in the noise as usage was increasing so fast. So this is what limits block size.

The network can’t really make the blocks at shorter intervals, and they don’t want to make them bigger, for example, unlike BSC that increased it further to 60 million gas and beyond that and shortened the block time, but at the expense of fewer and more carefully managed validators.

Instead, Level 2 takes the transactions of the manner, processes them outside, and then settles back on Level 1. That increases Tps into the thousands of Tps. Then after the merge, there comes one more step, which is sharding,  where you split the Level 1 network into 64 different parts.

If you’re familiar with for example quicksort, it’s faster to deal with the data in smaller domains first and then bring it all together.

Sharding will further increase the Tps. So to recap this section, it’s Layer 2 which is here now, and sharding that will come after the Merge, that will increase capacity and bring down transaction cost, not the merge.

The world relies on it for huge amounts of money and it’s the only smart contract network that I don’t think any regulator can go after at this point.

It is truly decentralized, not VC-backed, not controlled by a company. They don’t have business development managers. Ethereum is true, decentralized, in practice.

Now let’s talk about Etherium price, so a quick recap of the Ethereum chart first. First Larsson Line flipped gold here in April 2020, we got the dip down to support and got in at $175.

Then Larsson Line remained gold, we go a double bottom here, we got the channel that broke on the upside. 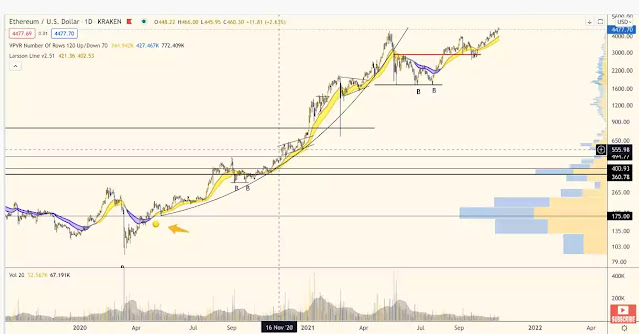 Larsson Line flipped blue, but it wasn’t. Instead, we got a double bottom. We confirmed the double bottom here at $2,400.

Larsson Line flipped gold shortly after. It did get scary again. Look, this is close to being a head and shoulders top, but Larsson Line remained gold.

We cleared the right shoulder here at $3,600, we cleared the local top and now we’re here. Why this is significant now is this: Look here: We’re getting a Cup and Handle formation. 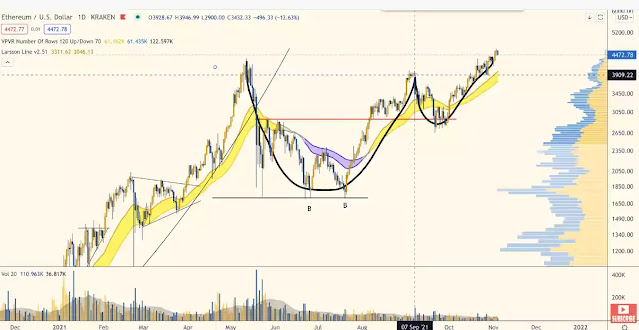 Not only have we passed the handle, but we’ve broken the all-time high and we confirmed this pattern.

The reason I started with a recap is this: If we look at the picture if this entire region from spring 2021 turns out to just have been a small consolidation pattern there’s nothing saying this can’t be just halfway.

If we look from the start of the parabola if we just get the similar-sized parabola here, this can easily go to $50,000 or even beyond. 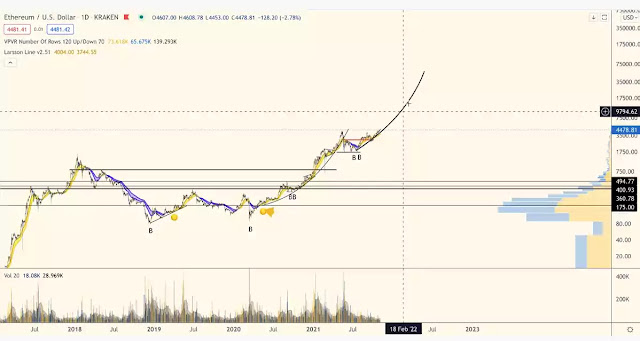 Does that seem crazy? Well, these things always do, until they actually happen.