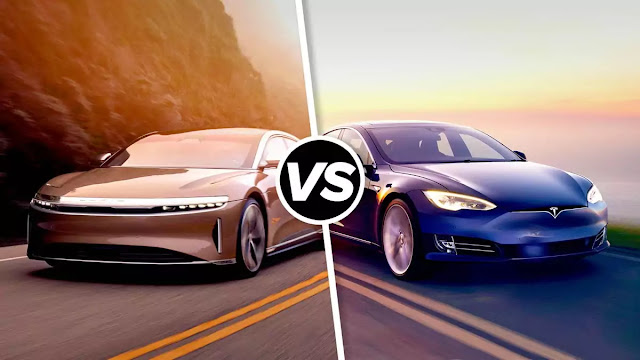 The comparisons are interesting, and with luxury electric car maker Lucid Motors coming to market, Tesla won’t be the only super cool electric car start-up in the game. Aren’t we listening to the name lucid quite a lot nowadays?

Do you think it is a competition for Tesla? Yes, perhaps! To find out why Tesla should be fearful of Lucid, read this article all the way to the conclusion. Tesla and Lucid Motors are both aiming for the luxury electric car market.

Tesla’s Model S has been in production for quite some time, but with the Model S Plaid, the automaker has pushed things to the next level.

Lucid, on the other hand, is still developing its first production car, the Lucid Air, which appears to have the potential to outperform Tesla in several areas, but Tesla may have some tricks up its sleeve. These two electric vehicles have similar performance and range and will compete in the market soon.

They are available at a range of pricing, with the most expensive one costing around $150,000. The Lucid Air Dream Edition, which has everything you could possibly want, as the name suggests, will cost roughly $170,000, while the top-spec Tesla Model S will be around $20,000 less.

They aren’t inexpensive, but the target population has a lot of disposable income. The Lucid Air will have a range of 517 miles according to the EPA, which is 20% longer than the Tesla Model S Plaid. That’s an amazing range!

In fact, depending on whether it comes off the manufacturing line before Tesla’s Roadster, it could be the longest-running automobile on the market. In essence, only the Tesla Roadster and Tri-Motor Cybertruck are predicted to have the same or better range on a charging vehicle than the Lucid Air.

Tesla was the first successful electric company, and it is today well-known. Purchasing a new car is a significant commitment, and in order to make that investment, one must have faith in the product and the company that produces it.

Tesla can be trusted to remain behind their cars ten years from now, but a new, untested firm like Lucid Motors may inspire a little more skepticism.

Tesla has positioned itself as a premium electric car company. While prices for the base models of both the Model S and Lucid Air are only a few thousand dollars apart, Lucid Motors is aiming for more luxury.

The flagship Lucid Air will be more expensive than Tesla’s offering, but for some people, having the most expensive toy is crucial. In terms of the flagship models, Lucid is attempting to appeal to a wider range of budget-conscious buyers than Tesla. To be successful, they must, of course, demonstrate that they can deliver on the required luxury standards.

The Entry-level models, on the other hand, proceed in the opposite way. Tesla has created its own infrastructure and has a considerably longer track record than Lucid. This means that Tesla charging stations and dealers are easily identified and accessible across the country.

Lucid is the new kid on the block and, as such, has to piggyback off other less well-known charging companies and their infrastructure. Current information suggests that the Model S costs a bit more than its Lucid counterpart.

The Model S costs $79,990, while the Lucid Air is expected to cost $77,000. Of course, the base pricing of the two models is nearly identical, yet Lucid still manages to undercut Tesla’s entry-level price.

These are, of course, only fundamental models. Both companies will have a wide range of trim levels to pick from, so the Lucid Air may be less expensive in some circumstances, but the Tesla Model S may be the best value for money in others.

The most remarkable feature of this is that the Lucid appears to feature both the lowest and most expensive models, which could be a good strategy for newcomers.

The Lucid can add 300 miles of electricity in 20 minutes, whilst the Model S Plaid can charge 200 miles in 15 minutes. This is faster than you may think because batteries charge faster when they’re empty and slow down as they fill up.

If you’re driving a long distance and don’t want to waste time waiting for a charge, this speedier charge time can make a major difference. The Lucid Air will have a maximum output of 1080 horsepower, compared to 1020 horsepower for Tesla’s Model S Plaid.

Even though the Lucid Air only has 60 horsepower, it still wins. Lucid Air, on the other hand, is no match for Tesla. Tesla’s Model S Plaid accelerates faster than the Lucid Air.

For those seeking dizzy acceleration, Tesla’s product is the better alternative. Despite the fact that they appear to be fundamentally similar, it appears that the Lucid Air will exceed its Tesla Model S Plaid counterpart.

The Model S Plaid is said to have a top speed of 200 miles per hour. At the same time, the Lucid Air is billed as having a top speed of more than 200 mph, with Lucid Motors claiming that it has reached 235 mph in recent testing.

Tesla’s Model S Plaid is the safest car on the market right now, scoring 5 out of 5 stars in every area. It is extremely rare for a car to achieve this; it even received five stars in the rigorous rolling test.

The Lucid Air from Lucid Motors is still awaiting ratings, and they’re hoping for a 5-star rating, but for now, Tesla is the clear winner. In a nutshell, the Tesla Model S Plaid and the Lucid Air are extremely similar vehicles with similar performance. It’s possible that the best is mostly a matter of personal preference.