The brain is a significant organ. It controls all your senses, as well as your cognitive reactions, memory, and learning.

It is necessary for all of your organs, including the heart and lungs. Keeping it healthy and functional is a good idea.

What you put into your body has a big impact on your brain’s health. In this article, we will be talking about the Nine meals that will improve your memory and brain function. 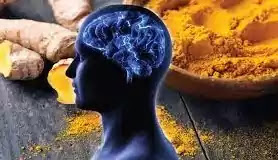 Turmeric has grown in popularity as a result of its multiple health advantages. This rich yellow spice offers a number of brain-boosting benefits.

Curcumin is a highly significant component found in turmeric. Curcumin has been shown to be able to pass the blood-brain barrier, allowing it to enter the brain and feed its cells.

Curcumin is an anti-inflammatory antioxidant that has been related to beneficial brain effects.

Curcumin has been discovered to be beneficial to patients suffering from Alzheimer’s disease. It may also help them remember things better.

It accomplishes this by removing amyloid plaques, which are a characteristic of Alzheimer’s disease. If you’ve been suffering from depression, a turmeric latte could be beneficial.

Turmeric’s curcumin component increases serotonin and dopamine levels. Both of these hormones are required for a positive mood.

It was even found that curcumin improved depression symptoms like antidepressants over a period of six weeks.

Turmeric milk is heavily recommended as a nighttime drink in some cultures. It appears that there is some truth to this.

Add a pinch of turmeric to your mashed potatoes the next time you’re sauteing them. You could even put it in your smoothie. Later on, your brain will thank you!

Pumpkin seeds are more than just a tasty snack. They also have incredible health advantages, particularly for the brain.

Their potent antioxidants protect your brain and body from the harmful effects of free radicals produced by oxidative stress. Zinc, magnesium, iron, and copper are also abundant.

All of these are necessary for your brain to function properly. Zinc has a crucial role in nerve signaling. Its deficiency has been linked to a variety of neurological and brain disorders, including Parkinson’s, Alzheimer’s, and depression.

You couldn’t be more wrong if you thought magnesium was less important. This mineral is necessary for strong memory and learning abilities. Magnesium deficiency has been linked to depression, migraine headaches, and epilepsy.

Copper is needed for a healthy brain, so eat more pumpkin seeds to get more of it. Copper regulates nerve signaling, and a deficiency of it can lead to neurodegenerative illnesses like Alzheimer’s.

And then there’s the most important part is concentration, which we all struggle with. Eat pumpkin seeds if you’re having trouble concentrating or have brain fog.

It has a high amount of iron, which helps to prevent brain fog and poor cognitive function. Add pumpkin seeds to your diet for amazing brain health advantages.

Fatty fish are a good source of omega-3 fatty acids. Salmon, Sardine, and Trout are particularly rich sources of omega-3.

According to experts, around 60% of our brain is made up of fat, half of which is omega-3. The brain relies on omega-3 to function properly. This includes memory and learning.

Apart from preventing Alzheimer’s disease, they may also help to slow down age-related mental deterioration.

Include oily fish in your diet if you want to keep depression away. Studies have found that a lack of omega-3may trigger symptoms of depression.

People who routinely consumed broiled or baked fish had more gray matter in their brains. Gray matter comprises nerve cells that control memory, decision-making, and emotions, and hence plays an important role in your intelligence. Soybeans, Flaxseeds, and Almonds are all good sources of omega-3.

Berries are high in flavonoid antioxidants, which help to minimize oxidative stress and inflammation in the brain. There are four types of antioxidants in them:

All of these fight to protect you from free radical harm. These substances have been demonstrated to improve communication between brain cells and aid in the formation of new connections by increasing plasticity.

Not only that, but berries may help you avoid or delay the onset of age-related neurodegenerative illness. This is accomplished by boosting your memory.

So, the next time you prepare oatmeal, don’t forget to include blueberries. When you combine them with a tasty strawberry smoothie, you’ve got yourself a fantastic brain boost.

If you like coffee, you’ll appreciate it even more after reading this. Simply, coffee is beneficial to your mental health! It contains antioxidants as well as caffeine, which both help with cognitive function.

According to experts, caffeine in coffee keeps the brain alert by blocking adenosine. Adenosine is a chemical messenger that induces sleepiness in humans.

You can see why coffee might make you feel wide awake and aware.  Caffeine also elevates your mood by increasing serotonin, a neurotransmitter.

According to studies drinking a large cup of coffee in the morning, or in lesser amounts throughout the day, increases concentration.  Nuts and Seeds

Antioxidants in coffee might lower the risk of neurological illnesses such as Alzheimer’s and Parkinson’s.

Nuts are high in antioxidants and omega-3 fatty acids, making them good for your brain. Experts have found that consuming nuts on a daily basis improves brain function in later life.

Another study found that Vitamin E to enhanced cognitive function and decreased the chance of Alzheimer’s disease.

Nuts are nutrient- and calorie-dense foods, so practice portion control. Eat walnuts, almonds, and hazelnuts to get maximum benefits.

You can also make eating nuts a delicious affair by adding them to your pudding and smoothies.

Avocados aren’t simply for salads and healthful sandwiches. It’s high in unsaturated fat, which is good for your brain. High blood pressure has been linked to memory loss.

Avocados help to lower blood pressure, which helps to avoid cognitive loss. So, the next time you go grocery shopping put avocados in your cart!

Green tea improves your brain’s overall health. According to experts, green tea has been shown to increase performance, attentiveness, and memory.

L-theanine, a type of amino acid, is found in this brain-healthy beverage. It has the ability to pass the blood-brain barrier and boost GABA neurotransmitter activation.

GABA helps you feel more relaxed and focused by reducing anxiety. L-theanine also helps you relax by boosting the frequency of your brain’s alpha waves.

Not only that, but the amino acid protects you from overstimulation induced by green tea’s caffeine. As a result, you may unwind and reap the benefits of good health without feeling overstimulated.

It’s a total win-win situation! Green tea’s polyphenols and antioxidants protect the brain from mental deterioration, which is especially important in conditions like Alzheimer’s. According to experts it also improves memorability.

After coffee, it’s time for chocolate! I sincerely hope this isn’t teasing you. Dark chocolate is beneficial for your brain.

Caffeine, antioxidants, and flavonoids are among the brain-boosting ingredients. Flavonoids in chocolate have been found to congregate in learning-related parts of the brain.

This improves your memory and slows down the mental decline that comes with aging.

Do you eat any of the following foods? Would you try any of them now that you’ve read this article? Please let us know in the comments section below.