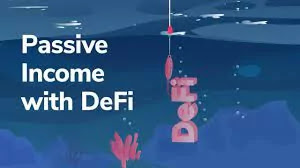 Other than Bitcoin and Ethereum, the other major innovation you’ve probably heard of is DeFi, which is short for decentralized finance. DeFi is a response to the historical system of banking and finance, which people now refer to as TradFi, traditional finance.

And that’s made up of your banks, your lenders, insurance companies that have been around for decades or more, even centuries in many cases.

Today, we’re talking about what DeFi is, why it has quickly become a very big deal, and how you can benefit to grow your own bank account while you sleep. Let’s get into it. In my prior article, I discussed Ethereum and referred to it as the Amazon Web Services of blockchains.

This means that, unlike the Bitcoin blockchain, Ethereum was expressly designed to allow digital applications to be built on top of it. These apps are called DApps. A dApp is a decentralized application, which is created using a smart contract.

Now as a footnote, Bitcoin is also experiencing many decentralized applications being built on top of that, and I’ll have to cover that in a separate article. So a smart contract, in its simplest form, is a computer code that is programmed to execute pre-determined functions when rules in the smart contract are met.

Innovation is that, because this process can be programmed, you no longer need an intermediary, such as a bank, a lender, or even a regulator to serve as the middleman. People can enter into trade and commerce globally directly with one another.

DeFi today is about $82 billion industry, and you can earn a yield anywhere from 1% to 10% interest or more by depositing your tokens into a smart contract.

So why is DeFi taking off, and why now? Well, I had a colleague a few years ago when the first DeFi summer broke, and what he would do is take 70% of his monthly take-home earnings and convert that into Stablecoins.

So Stablecoins are a digitalized token version of the US dollar or any other national currency. They’re called Stablecoins because the goal is that price of the Stablecoin will be stable.

And generally, that means that they might fluctuate a penny or a fraction of a penny up or down, but it’s generally stable at about $1.

So the key here is that where people wanna speculate and they want to hold crypto but they don’t always wanna have their cash balances fluctuating at the same rate at which, let’s say a Bitcoin or their token might, then they will hold Stablecoins because it’s gonna be more stable, and it will allow them to properly keep the desired value.

So Stablecoin solves that problem of volatility of directly holding Bitcoin or Ethereum or some other cryptocurrency. DeFi turbocharges the usefulness of those Stablecoins.

With 70% of that monthly take-home pay, as I said in my first part of the example, my colleague would take that entire amount.

So let’s say that’s $8,000, and instead of holding it in the bank, earning no interest, he would convert the cash to USDC or another Stablecoin, and now you have $8,000 in that USDC.

So now, he can take that $8,000 in USDC and deposit the entire amount into one of the many DeFi protocol smart contracts or use a lending site, such as BlockFi, Nexo, or Celsius.

These DeFi protocols incentivize people to deposit the Stablecoins because they can use the Stablecoins to provide liquidity through their site or on their decentralized exchange if they have one.

A decentralized exchange, a DEX, is just like Coinbase or Kraken, except there is no company, there is no CEO, there’s no staff, it’s just computer code, connecting buyers and sellers. But you can allow the buys and the sells with Stablecoin as the key liquidity to allow the transaction to happen on the back end.

So on the back end, the DEX is paying a yield for people who allow the DEX to lock up that liquidity into the protocol. And the yield can be anywhere from 1% to 10% or even much higher, depending on market factors.

So let me say that again, the yield people can earn is anywhere from 1% to 10% for just parking cash. So this means that you could deposit, in my example, $8,000 of USDC and potentially get up to 10% yield or even more providing list liquidity into the protocol.

And after the fixed period of time is pre-agreed, you’ll receive back your USDC plus the yield that was agreed in the form of a protocol token.

So next, you convert all the tokens, your original amount, plus the interest earned and you pocket that difference in the interest as well.

Now, if you think about DeFi at scale and why it’s a multi-billion dollar industry is that let’s take a larger example, so if you pull out your smartphone at home and you multiply $1 million at 10%, that’s gonna be $100,000 return or a yield on that cash that you might otherwise just have sitting in your bank account.

And this is why DeFi is taking off. No bank anywhere can provide this level of yield. And specifically, in some countries, particularly in Europe, they’re providing a negative yield, which means they’re charging you to keep your money in the bank.

So you can really see how, depending on your life circumstance, the country you live in, your financial situation, this product can be something that could be very attractive. So what’s the catch? The catch is that this technology is new, and it’s clunky, and it’s also much riskier than a plain vanilla savings account.

However, you are being compensated for that risk. So what about you? You can take advantage of the high level of yield in a number of ways.

Convert US dollars into a Stablecoin

The simplest way is to convert US dollars into a Stablecoin like USDC or by one of the popular DeFi protocol tokens directly from a Coinbase, or Kraken, or Gemini. These tokens, generally, there’s a number of them, but I’ll just name two, which are Aave and Compound.

They will allow you to directly deposit those tokens into the Aave or Compound smart contract to start earning a yield instantly. So this seems a bit complicated, you don’t have to worry about that because the major exchanges will offer the tokens as well as Stablecoins.

And just to be clear as well, I’m not sponsored by any of these exchanges or any of the protocols that I’ve just mentioned. These are just, specifically the lending protocols.

So let me know in the comments if you’d like to see an article where I walk through depositing the token into the smart contract, generating the yield, receiving the yield, converting it back into USDC. It might sound a bit complicated, but it’s actually pretty straightforward. Thanks for reading and take care.