Pertussis, also known as Whooping cough, is an infection of the respiratory system. Bordetella pertussis is the bacteria that causes it.

Pertussis is caused by microscopic bacteria having a rod-like shape. It mainly affects babies under the age of six months who have not yet had their vaccines, as well as those aged 11 to 18 whose immunity has begun to fade.

It’s a highly contagious upper respiratory tract infection transmitted through aerosols or by touching the eyes, nose, or mouth with an infection source.

And bacteria damage airways and allow mucus to build up in the airways until it’s forcefully removed by violent coughing fits followed immediately by a whooping noise when the air is finally able to come back into the lungs after a fit.

But we also talked about a few modifying factors. A modifying factor can be anything that makes these three stages difficult to tell apart because the symptoms are milder and the transmission rate is lower. 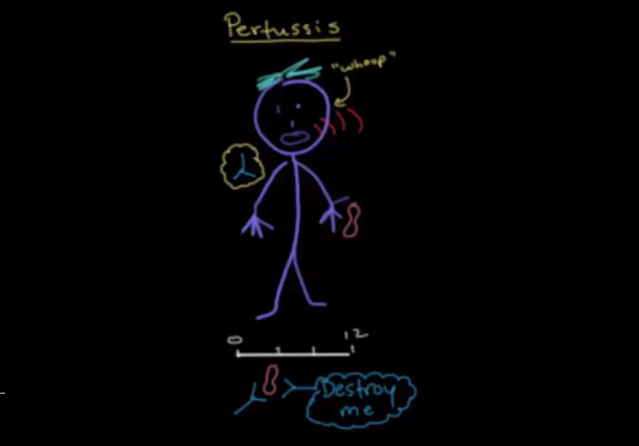 So, one of these factors was a previous infection with a disease. So, let’s say that the dad of the family here was infected with Pertussis a few years ago, and his body, like yours or mine, would mount an immune response by making antibodies against Pertussis.

These antibodies are like specialized tags that attach specifically onto the Pertussis bacteria and proteins produced and flag them for destruction.

Once that clears the infection, he’s left with a level of Pertussis antibodies in his body for a long time after. So, let’s give him an antibody badge here to remember that he has immunity against Pertussis.

This means that if he’s reinfected with Pertussis his immune system is ready or primed for the infection and can fight it more quickly so he becomes less contagious because he kills the disease faster, and the classically clinical symptoms of the disease become milder or may not occur at all.

Now is a good time to bring in the rest of the family to discuss another modifying factor which is vaccine history.

Vaccines are like training with practice runs so that you’ll be able to handle the marathon meaning let’s say that grandpa had a Pertussis vaccine recently. 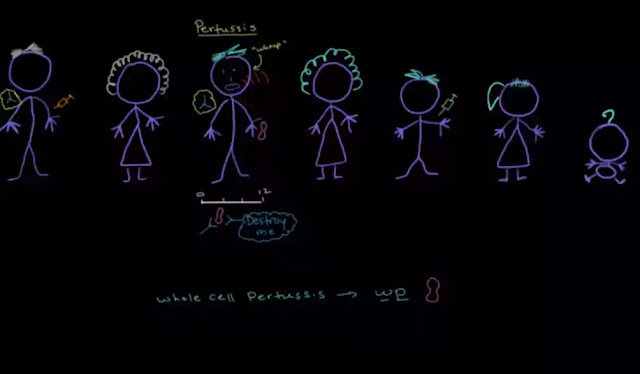 The vaccine causes his body to produce antibodies against the bacteria and proteins a lot like a true infection would but this way if he’s ever exposed to a natural Pertussis infection or in the analogy, a marathon, his body’s primed to fight just like dads.

So, he has an antibody badge too. But there are a few Pertussis vaccines out there and they vary in their components that make up the vaccine even though they have all the same goal of generating antibodies against Pertussis.

So starting with the whole-cell pertussis vaccine. Sometimes this is abbreviated WP for whole-cell Pertussis.

It contains the entire dead Pertussis bacteria with the majority of its proteins. Then it’s given in a series of four vaccines between two months and fifteen years old.

And while this series is about seventy and ninety percent effective in preventing a serious Pertussis infection it also had a high incident rate of discomfort at the injection site and mild Pertussis-like symptoms following the vaccine.

These vaccines contain just pieces of Pertussis bacteria and some of the proteins and protein-based toxins made by the bacteria that we discussed previously.

Which proteins and toxins are in a particular vaccine depend on the manufacturer. And there are two vaccines that fall under this acellular category. 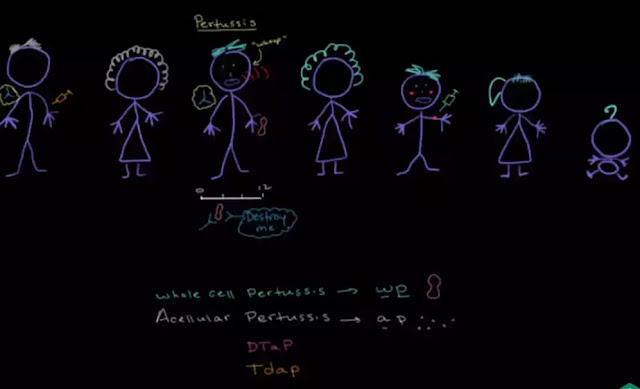 They’re both given with diphtheria-tetanus which is why they have a D and a T appearing in their names. They’re DTaP (Diphtheria, Tetanus, Pertussis) and Tdap (Tetanus, Diphtheria, Pertussis), and there are a few differences between the two vaccines.

To start with, this capital Instead of a lowercase p here represents a higher dose of Pertussis in the DTaP vaccine.

This higher dose is given in a series of five vaccines at two, four, and six months, and some are between fifteen and eighteen months, and then again between four and six years old.

This series is eighty to eighty-five percent effective in preventing a serious Pertussis infection but it has fewer side effects than the whole-cell pertussis vaccine.

It’s important to know that neither natural exposure nor any vaccine will give a person a hundred percent immunity to Pertussis.

This is because over time antibody levels in the body drop to a point where they’re, they aren’t as protective.

So, to avoid this from happening there’s the Tdap. Tdap is a booster that should be received every five to ten years and the last infection or vaccination.

I like to think of the boosters as, like, our refresher course. You take a refresher course when you’ve already studied some material on point but you need to see it again to jog your memory. Booster does the same thing.

Grandpa may have had a Pertussis infection when he was younger but the booster’s needed to refresh his body’s memory against Pertussis and bump up his antibody levels which tend to fall throughout the years.

Everyone should take care to get a booster on time but there are some groups who should be extra careful.

Those who have underlying respiratory disease, those who are amino-compromised, or let’s say grandma is a healthcare worker and since immunizing can help prevent the spread of Pertussis from one person to another, she should take care to be vaccinated.

And really anyone in this family should be vaccinated ’cause they’re gonna be around an infant that they don’t want to infect.

Lastly, expecting moms at twenty-seven to thirty-six weeks at each of their pregnancy you should get the DTaP because the antibodies that the mom produces in response can be passed along to the baby.

Then when the baby is born the baby will have some protective passive immunity to Pertussis until he or she can receive the first Pertussis vaccine at two months.

Outbreaks for Pertussis are on the rise and though there is a school of thought that Pertussis bacteria is mutated making the available vaccines less efficient it’s largely due to children not getting vaccinated and adults not receiving their boosters.

So, this makes transmission of the infection high and symptoms and complications from infections more severe.