Today we’re going to talk about the Japanese bullet train Shinkansen, They are operated by Japan Railways (JR) Group companies and some of the fastest trains in the world, traveling at up to 325 kilometers per hour. They are famous for speed, punctuality, comfort and safety

Because then, you apply brakes on all these 28 motors. And if you do it with synchronization,  you can stop much more efficiently without disturbing the passengers. Because each passenger experiences the braking of only their carriage.
So,  they do not only go straight but also there’s a little oscillation, there’s a little movement from side to side. So, the wheels are not going straight. Rather they’re going straight like this.
Trains sometimes take very strong curves. Sometimes the trains have to do that. And in case the train is going at a high speed of 300 kilometers an hour; if you have to take a  sharp curve for whatever reason, you are risking derailment. 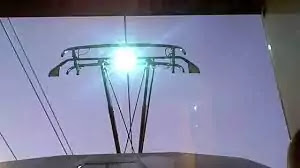 Why do we have these sparks? What happens is that the pantograph is not always able to make continuous contact with the wires up there. So, sometimes because of the air, the wind, the speed of the train, and other factors.
What happens is that sometimes there is a small disconnection between the pantograph and the electrical wires. And so,  this small gap in the contact, what it does is the air in that gap becomes plasma. And plasma as you know is a very high-temperature thing.
It ionizes the air in that area!  This plasma spark can create big problems when you’re driving the train at 300 kilometers an hour. It doesn’t create much problem in trains that drive at let’s say 40 to 50 kilometers an hour, which is the case with the metros and the subways and the trams.
But at high speeds, the stakes also are very very high. And so, THAT becomes a problem. So what do we do so that there’s never a breakage in the connection?
There’s no discontinuity; the pantograph never breaks away from the wires up there?!! So, what the engineers came up with was a compensation mechanism – a   feedback system – a kind of a lever system.
And they increase the chance of the train compartments catching fire. So that is very very dangerous. So at 25,000 volts, with the train running at 300 km an hour, you can’t afford even a microsecond of disconnection between the pantograph and the electrical wires up there.
So that’s why they needed a system, a pantograph -we can say the perfect pantograph. And they did it! They built it using their ingenuity! n that’s the fourth big difference between a   normal electrical vehicle (electrical train) and a bullet train.
But the question arises why do we need this shape? If you look at the first bullet trains that were unveiled in 1964,  their front actually looked like a proper bullet like a gun bullet.
But very soon engineers realized a big problem. So what happened is, as you know Japan is a very mountainous country. And so when they built these bullet train tracks, they have to cut through a   lot of mountains.
So, the bullet trains would go through a lot of tunnels. Now, what’s the problem there? Well, the problem is with the design that we had initially in 1964, it didn’t allow the air (to escape).
Because when you’re going inside the tunnel at 300 kilometers an hour what happens is the air that was in the tunnel has no way to escape because of the shape of the bullet train. And so, the air is also pushed at a very very high speed.
What it does is it creates a SONIC BOOM (a sonic blast). So, as soon as the train enters one end of the tunnel,  the other side of the tunnel would ooze out a lot of very dangerous waves coming out at a  very dangerous speed.
So this sonic boom -this sonic disturbance was extremely dangerous;   and engineers had to do something about it.
So they realized that the best shape to cut through the air without creating this sonic problem is to make the face of the train similar to the beak of a Kingfisher.
The kingfisher’s beak is very unique and it allows for the optimum breaking of the air or water in a very streamlined way. And that’s exactly what the engineers wanted for the trains to do.
They wanted the trains to break (the air), pierce through the air, allowing them to escape not only in the front but also in the back.
And so, when you see the front of a bullet train,  there’s the beak of a kingfisher. So, these are the five technical differences between a normal electric train and a bullet train. 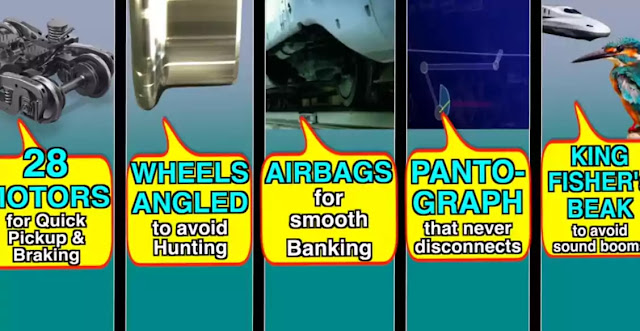